The Autobiography of Benvenuto Cellini Vol 2 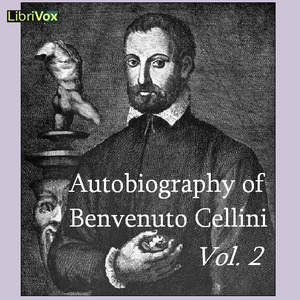 The Autobiography of Benvenuto Cellini Vol 2

Cellini's autobiographical memoirs, which he began writing in Florence in 1558, give a detailed account of his singular career, as well as his loves, hatreds, passions, and delights, written in an energetic, direct, and racy style. They show a great self-regard and self-assertion, sometimes running into extravagances which are impossible to credit. He even writes in a complacent way of how he contemplated his murders before carrying them out. He writes of his time in Paris:

Parts of his tale recount some extraordinary events and phenomena; such as his stories of conjuring up a legion of devils in the Colosseum, after one of his not innumerous mistresses had been spirited away from him by her mother; of the marvelous halo of light which he found surrounding his head at dawn and twilight after his Roman imprisonment, and his supernatural visions and angelic protection during that adversity; and of his being poisoned on two separate occasions.

The autobiography is a classic, and commonly regarded as one of the most colourful; it is certainly the most important autobiography from the Renaissance.

Cellini's autobiography is one of the books Tom Sawyer mentions as inspiration while freeing Jim in The Adventures of Huckleberry Finn. (Summary adapted from Wikipedia by Karen Merline)